What About Preparing For Ocean Warming?

Home » Climate Change » What About Preparing For Ocean Warming?

Due to Ocean Warming, fisheries and corals are in grave danger, hurricanes are increasing, and toxic algae blooms are on the rise. The world is 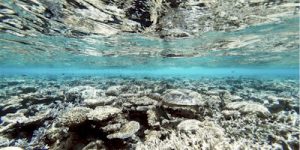 ignoring the oceans at its peril.

In late August, President Obama announced he would create the world’s largest marine sanctuary around Hawaii—an area that contains 7,000 species and covers more than 58,000 square miles. But no matter how much area a world leader protects, there’s no protecting the ocean from the rising temperatures that will wreak havoc on marine ecosystems.

A new report from the International Union for Conservation of Nature (IUCN) delves into what the organization’s director general calls “one of this generation’s greatest hidden challenges—and one for which we are completely unprepared.”

What he is getting at is that, while the causes of ocean warming aren’t distinct from the broader problem of climate change, the effects are a massive all on their own. The impacts of a warmer ocean can already be seen, the report says. Groups of plankton, jellyfish, turtles, and seabirds are migrating toward the north and south poles by as much as 10 degrees latitude. Fish stocks are down in some areas, and the future of some tropical fisheries may be in danger. Rainfall patterns globally are out of whack, and ecosystems like the Great Barrier Reef are in grave peril. Human pathogens and harmful algae blooms are thriving in warmer waters; so are hurricanes.

The oceans are taking the biggest hit from a warming planet because they absorb the majority of the excess heat trapped by manmade greenhouse gas emissions. For a long time, this has slowed the effects of global warming on land, but it has also caused enormous impacts on marine life. Research by the Grantham Institute found that if all the heat that went into the ocean between 1955 and 2010 had gone into the atmosphere, the earth would be 36°C warmer than it is today.

As the report says: “The scale of ocean warming is truly staggering with the numbers so large that it is difficult for most people to comprehend.”

In the end, ocean conservation is important to guard against some of these effects, but it can only do so much. The IUCN says that addressing climate change directly by substantially reducing greenhouse gas emissions is the most important thing the world can do to protect the planet’s oceans—and the human life that depends on them.